The First Railroad Hub of the South - Weldon NC

The Union Station of Weldon, North Carolina, holds a unique position in Southeastern railroading history. Aside from being one of the first railroad "hubs" in the US, it was one of just a few facilities jointly owned and operated by both the Atlantic Coast Line and Seaboard Air Line Railroads. This article, the first in a two part series, will review history and geography of the Weldon area as it pertains to railroad activity. In addition, we will chart the development and changes to the SAL dominated part of the station, from its construction in 1912 to the present day. In part two, to be published in the next issue of Lines South, we will examine the ACL portion of the facility, including the elevated platforms and viaduct.

Lying on a plateau above the fall line, the Roanoke River and at the edge of the Coastal Plain and the Piedmont, Weldon's Apple Orchard was a strategic location for transportation in the early and mid-1800's for North Carolina as well as the South. With its name changed! in the mid-1800's, Weldon was home to five railroads. These included the Petersburg & Roanoke (later ACL), Seaboard & Roanoke (SAL, successor of the Portsmouth & Roanoke), Raleigh & Gaston (SAL), Wilmington & Weldon (ACL), and the Weldon Mill Railroad. The Weldon Mill Railroad was a narrow gauge logging line which ran from South Weldon extensively into the southwestern areas of Halifax County.

The first railroad tracks into Weldon were from the South, the Wilmington & Weldon Railroad, which at the time of its completion in 1841 was the longest railroad in the world. The Seaboard & Roanoke am! the Petersburg & Roanoke arrived next. In 1853, the Raleigh & Gaston Railroad followed these two into Weldon. The Petersburg & Roanoke originally stopped on the north bank of the Roanoke at Blakely, just south of Weldon downstream about 1/2 mile, then ferried! its cargo across the river to Weldon. In the 1840's, the Petersburg & Roanoke built a bridge across this area and came into Weldon on what is now Mush Island Road and Second Street to connect with the Wilmington & Weldon. The Seaboard & Roanoke built their bridge just above the first falls of the Roanoke River, cutting through an embankment on the north side.

In 1853, the Raleigh & Gaston was looking for a better connection than the one they had at Old Gaston (across the River from Thelma, N.C.) with the ports of Virginia and the East Coast. They cut a two mile right-of-way through granite rocks and ledges along the southern shore of the Roanoke River, then another ten miles to reach Roanoke Junction. This line continued four more miles to Weldon, terminating just west of the Wilmington & Weldon and the Seaboard & Roanoke. 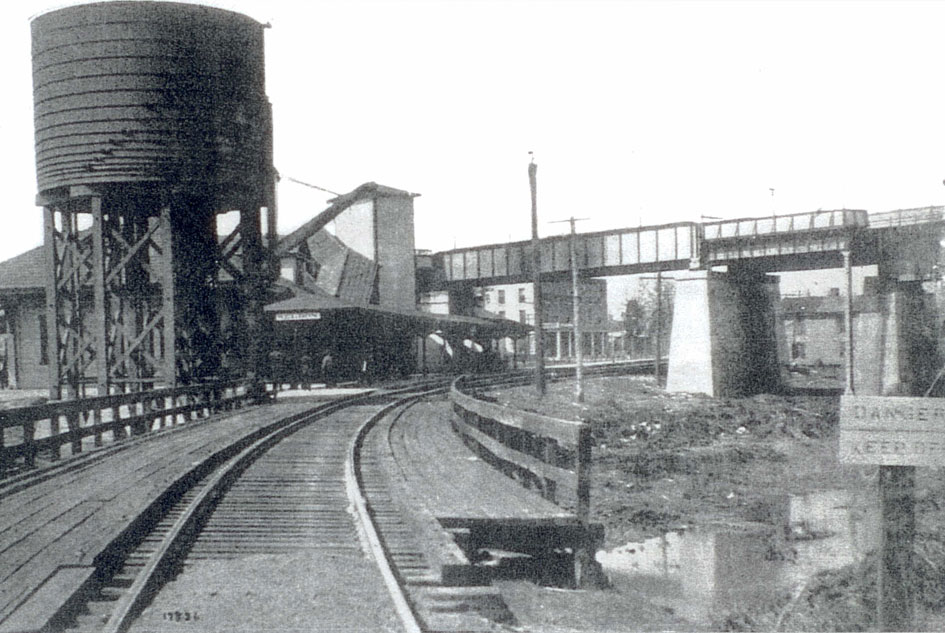 After the War Between the States, the only bridge rebuilt was that of the Seaboard & Roanoke. The Petersburg & Roanoke opted to connect with the Seaboard & Roanoke at Garysburg, just east of the present location of the Garysburg Methodist Church, which during the war was the site of a Confederate hospital. The Petersburg & Roanoke's right-of­way is still being used in transportation today, as highway U.S. 301 travels from the point of the new line built in 1911-12, to connect with the new bridge across the Roanoke River, to the intersection of highway N.C.46. The Petersburg & Roanoke used the Seaboard & Roanoke's bridge from 1867 until the new bridge was built in 1910-12. There are several piers which we have seen with dates cut into them; one that stands out is that of 3/18/12, the first pier we found with a date.

By now, affiliations were formed and eventually the Petersburg & Roanoke and the Wilmington & Weldon were joined, as the Seaboard & Roanoke aligned with the Raleigh & Gaston. Weldon was now a regional railroad hub during the 1870's and until the early 1900's. Only the citizens of Weldon and the surrounding area prevented it from becoming one of the biggest railroad junctions in the southeast. The railroads were constantly chastised for blocking crossings, making animals bolt, and just making too much noise for the people. The land owners outside Weldon did not help either, as the railroads could find no land at a price they could afford to build larger yards and support facilities.

These impediments, along with the continuing complaints from people of Weldon, and the desire to have their own access to crossing the river and the town. helped the newly formed (1900) Atlantic Coast Line decide to build their own bridge.

Several years after the railroads were consolidated into the Seaboard Air Line and the Atlantic Coast Line in 1900. the ACL decided to demolish their hotel and the buildings around it and started grading and building piers for their new bridge. With this decision also came the need for a ticket office and station facility for their customers.

With the SAL also in need of improved facilities. an agreement was reached to construct a joint ACL and SAL facility. This joint station would become the Weldon Union Station. finished in 1912. The lower section of the Union Station was designed and constructed by the SAL. The building was constructed of yellow brick with brown painted trim work and a terra cotta tile roof. It housed the ticket offices for both railroads in the middle of the building. with a large waiting room on either side. Since the building was built during the years of segregation. one room on the north side of the building was the white waiting room and the other side was the "colored" waiting room.

Each of the waiting rooms had two large restrooms for male and female patrons. The south side of the building had a large baggage and mail handling area and would hold 15 large mail wagons (four wheel). five wide and three deep. There was a large door at each end for access to the elevator to go upstairs for the ACL. and out the other side to the Seaboard sheds. This baggage room was constructed on a concrete slab. which was also the ceiling for the boiler room and coal storage room. The area above the baggage handling area was used for access to the ceiling of the main building and for record storage.

Built as a joint facility, the two railroads each maintained the structure on a two year rotating basis in which the all expenses were paid by that railroad during its turn. Ticket revenue of each railroad was forwarded to their respective banks by way of the Railway Express Agency. The Atlantic Coast Line built an extensive elevated structure- two waiting rooms, as well as platforms to support the handling of passengers, mail and express. There was also a freight elevator for transferring primarily mail. express traffic and baggage, but also some of the tall four wheel carts known around the railroad as "Hearse" (*see Rail Mail) carts. Weldon was for years a transfer location for bodies from the U. S. Navy in Norfolk, traveling by rail to Charleston, S. C. The original elevator was built right at the end of the building on the north end of the upper waiting rooms. This was found to be inadequate and a larger one was built, some time before 1932, between the southern end of the upper waiting rooms and First Street. The upper shed and waiting rooms, along with the main building and the lower sheds made quite an impressive sight.

In the late 1950's, the Seaboard decided to close their freight office and move the work into the ticket office, with a single agent. This was done easily since the ticket office had telegraphy and phone works in place for both the SAL and the ACL, and Weldon no longer required a permanent yard switcher on site. This work was done by the upper yard switcher at Roanoke Junction, in Roanoke Rapids. To compensate the ACL for this service, the night ticket clerk did the ACL freight reports. As passenger business declined and the mail contracts were canceled, the sheds and building became expendable and fell into disrepair.

In February 1968, Seaboard Coast Line (formed by merger of the ACL and SAL in 1967) discontinued the TIdewater, #17 & 18 to Norfolk and with the advent of Amtrak in 1971. all passenger trains ended their regular scheduled stops at Weldon. Also in 1968, SCL removed several spans of the Seaboard bridge over the main channel of the Roanoke River. At the same time, they made a connection on the north bank of the river from the Seaboard main line to the main line of the Coast Line. On the Weldon side of the River, a small radius "dog-bone" loop was constructed. This was supposed to allow trains arriving from Roanoke Rapids to gain access to the connection. This loop proved to be an operational headache, because after trying several times. the SCL found it could not push cars into the loop, but had to pull all cars through it. This necessitated having the yard switcher in Roanoke Rapids stop its work and come to Weldon to pull mainline trains (mostly Amtrak), which were normally detoured when either the SAL or ACL main was blocked.

In 1976, the then Mayor of Weldon, Sam Oakley, who was the Seaboard Coast Line's Signal Maintainer, made arrangements for the main terminal building of Union Station to be given to the Town of Weldon. In exchange, the town agreed to remove all the upper structure platforms, stairs, wailing rooms and sheds, along with their supports. While the Union Station building today is standing, it is being used as a library. A group, the Weldon Railroad Museum, Inc., would like to take the site back and restore the building to its original appearance.

In 1983, The Seaboard System (successor to SCL) severed the Norlina to Roanoke Rapids section of the Portsmouth Sub-division, and the detour movements stopped. The Roanoke Rapids switcher still comes to Weldon, through the loop, and picks up cars destined for the paper mill. The viaduct remains in use by CSX, serving a modest amount of daily freight traffic. This includes piggyback trains, general freight and an auto rack train from Norfolk to Atlanta, usually two times per week. The Tropicana juice train passes daily. as do unit sulfur and coal trains.

Passenger traffic includes the daily Amtrak Silver Meteor. Silver Star. Silver Palm, Auto Train and Carolinian, both north and southbound; unfortunately, none of them stop at this once grand facility